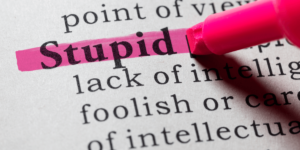 On September 10, 2019, I received the phone call no one wants to get. A family member died by suicide. It was World Suicide Prevention Day. I still haven’t fully processed the events of that day. It was and is too much for my mind to wrap around.

It wasn’t long before people began to say the things they always say when someone dies by suicide.

When someone dies by suicide, people don’t know what to say, so they fall back on the platitudes and rhetoric they have heard on the evening news. Just because something is conventional wisdom doesn’t mean it is wise or kind.

Well-meaning people say the stupidest things when someone dies by suicide because they just don’t have the words to articulate the complex feelings they have on the subject.

I know the word “stupid” elicits a negative emotional response. It is an unkind word I don’t use in everyday conversation, but I think it is necessary to use strong language here because of the gravity of the subject matter. We will not change the conversation about suicide by being polite.

Here are five stupid things people say when someone dies by suicide:

I must admit that until a very short time ago, this was the phrase I used to refer to someone who died by suicide. It was what I had heard my entire life, and I accepted the idea that saying someone “committed suicide” were the right words to say.

I noticed a shift in the last few years from saying “committed suicide” to “died by suicide,” but I didn’t know the reason for the shift.

When I wrote part two of my series on grief, I read Finding Meaning by David Kessler. He explained the problem with saying someone “committed suicide.”

According to David Kessler, “We don’t understand the power of our words regarding suicide. The conventional way of recounting it is to say, ‘He/she committed suicide.’ The word ‘committed’ is usually used in the context of crimes. A broken mind is a tragedy, not a crime.”

Just typing that statement makes me shake my head in disbelief. I will never understand why people believe a person who died by suicide thought it was an easy answer to life’s difficulties.

People don’t wake up one morning and say, “This would be a great day to die.” Suicide completion is often the last act of a troubled mind who can no longer navigate the excruciating mental anguish they have battled day after day, week after week, month after month, year after year.

There is nothing easy about suicide. Not for the person who died that way and not for the people they left behind. 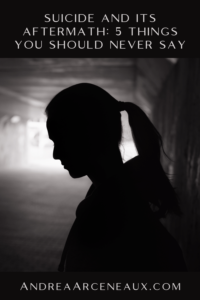 3. He/she was selfish because they died by suicide.

Saying someone was selfish because they died by suicide implies there is a choice involved. While theoretically I understand that the person must make the choice to act out their suicidal ideation, I also know that for most, suicide doesn’t feel like a choice.

For those who wrestle with mental illness and suicidal ideation, it feels like an inevitability. It feels like suicide chose them, not the other way around.

In his book, Finding Meaning, David Kessler says, “Death by suicide is not a selfish act or even a choice. It’s a sign of a mind that needs help. It’s a horrific outcome to a tragic situation.”

While someone might find comfort in those words six months or a year down the road, they offer no real solace in the dark days following a loved one’s suicide. The person’s only thought is that there is no better place for their loved one to be except in their presence, alive.

Saying that someone is “in a better place” has become a platitude with no real meaning. It has become the phrase used when someone doesn’t know what else to say.

If these are the only words of comfort you have to offer, it is better to remain silent and support someone with your physical presence or with a practical act of service.

5. He/she is in hell because they died by suicide.

When we lost our family member to suicide in September, my daughter began to process her grief by sharing the news with a friend on the bus.

That friend told her that her uncle was in hell because he died by suicide. Can you imagine my daughter’s horror when she relayed her friend’s comment to me? I had to do damage control. Fast.

Nowhere in the Bible does it say that suicide is the unforgivable sin. In fact,  the Bible only mentions suicide six times and never as a condemnation of the person who died that way.

And even if your religion believes that the price of suicide is eternity in hell, are those the most comforting words you can share with someone who is grieving the loss of a loved one? Are those words kind? Are they necessary?

The suicide epidemic is a worldwide tragedy that will not disappear overnight. Because suicide is such a polarizing event, people stand on the sidelines staring and saying nothing, or they say too much with words that are damaging to those left behind.

We must break the silence about suicide, but we must do it in a way that encourages those who struggle with suicidal ideation and those who have lost a loved one to suicide. We must replace the wrong words with words that bring comfort and stir people to action as we work on saving lives and bringing those heartbreaking statistics down one by one until the word suicide becomes extinct.

If someone you know is struggling with suicidal thoughts, please use the following resources to help them get professional help:

Crisis Text Line—Connect with a crisis counselor by texting “START” to 741-741. Available 24/7. If someone you know is struggling with suicidal thoughts, please use the following resources to help them get professional help.

Veterans Crisis Hotline—Call 1-800-273-8255 and press 1 to connect with caring, qualified responders with the Department of Veterans Affairs. Many of them are Veterans themselves. You can also send a text to 838255.

The American Foundation for Suicide Prevention provides a wealth of information about how to handle a suicidal friend or loved one. Read their blog post that outlines the ways to start a real conversation (#RealConvo) about suicide with someone in crisis. Click here to read that blog post.

Read my blog post that outlines five steps to help someone who is suicidal. 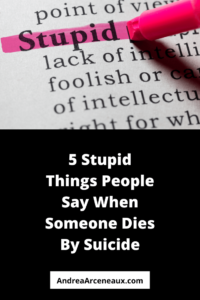