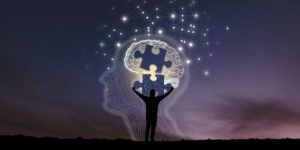 We live in a world where there is an abundance of misinformation about mental illness. With unreliable information, it is only natural that fear replaces reason.

People form their opinion about mental illness—and those who struggle with it—from what they see on the evening news or their Facebook feed. The news is grim and sensationalized, and the depiction of mental illness on television shows and movies does nothing to diminish the stigma that has become so deeply rooted.

As Mental Health Awareness Month winds down, I thought this would be the perfect time to address six truths about mental illness you should be aware of. Learning these simple truths about the mental illness experience opens the door to better understanding and acceptance.

Here are six truths everyone should know about mental illness:

1. Mental illness is invisible. Even though a mentally ill person looks fine, there is often a battle raging in their mind.

Like so many chronic illnesses, mental illness is invisible. The people suffering do not have a scarlet letter on their chest stating their diagnosis.

Those of us who are navigating mental illness look just like everyone else. In fact, many of us have developed a façade of normalcy from years of practice. That means we have learned to blend in, even when we are at our lowest.

There have been moments in my life when I have had a normal, everyday conversation with someone while I was hearing voices in my head. I have been at family gatherings smiling while I silently begged God to kill me because I was suicidal and felt unworthy of being alive.

It is important to know that when you live with mental illness, being okay and not being okay look exactly alike at first glance. Your mentally ill loved one who is seemingly okay is not flaky, mad, or aloof when they don’t answer your emails, texts, and phone calls. Chances are there is a battle raging within, and they are fighting to survive another day.

2. A mental illness diagnosis does not demonstrate a lack of faith or insufficient prayers.

Let me be clear here. If God wanted to heal someone’s mental illness, He could. God is sovereign, and He can do anything, but God won’t heal mental illness more often than not.

And frankly, if someone told me that God said He healed their mental illness, I would tell them to make sure that what they heard was not a manifestation of their disease.

You don’t lack faith if you don’t believe God healed your mental illness. You must remember that it is God who created science and medicine. He has provided us with the tools necessary to treat whatever mental illness diagnosis we face.

You can hold God at the center of your life, have an abiding faith, and still be mentally ill and need to pursue professional help. 3. Mental illness is out of the person’s control. Don’t assume a person quit following their treatment plan because they had a relapse.

There are those who believe that finding the right medication will end the mentally ill person’s struggles. They believe that taking medication is like waving a magic wand and “Abracadabra,” a person’s mental health challenges disappear.

They watch you go into remission and believe that your mental illness will lie dormant for the rest of your life, and if you have another episode, you must have quit taking your medication.

Here’s the ugly truth about mental illness: You can follow your treatment protocol to the letter and still get sick.

You can treat mental illness, but you can’t control it. You can do all the right things and still have a terrible outcome. Repeatedly.

It is disheartening to take a cocktail of medication for years that has maintained your stability only to wake up one morning to find it no longer works, but it happens. Every day.

4. Medication treats the symptoms of mental illness, but it does not change a person’s temperament and character.

Do you know someone who is mentally ill, following their prescribed medication regimen, and yet they remain mean and selfish?

Medication treats a person’s mental illness symptoms, but it does not change their character or temperament. A person does not begin a new drug regimen, take few pills, and wake up a week later a whole different person.

If the person was unkind and self-absorbed before they began treatment, that won’t change unless they are intentional about addressing those poor character traits.

You can’t attribute all shortcomings and idiosyncrasies to mental illness. Mental illness may magnify them, but some behaviors and attitudes are inherent to a person.

Does that mean that a mentally ill person can never grow and change? Of course not. It just means that medication alone will not change a person at their core.

5. We should treat people who are mentally ill with the same kindness and respect given to everyone else.

In my experience, people will rally around their mentally ill loved ones in support until their symptoms get scary. Then they quit answering their phone calls and texts.

Some don’t respond because they don’t know what to say, but others run in the other direction because they are afraid that maybe mental illness is contagious, and if they stand too close to you, they will catch it. That maybe the crazy will rub off on them.

It is easy to look down on what you don’t understand, but those with mental illness deserve to be treated with the same modicum of kindness and respect given to everyone else.

I believe the mentally ill actually deserve a double dose of kindness and respect because of the invisible battle they must fight every single day just to stay alive.

6. Those who live with mental illness are just like everyone else. They are just wired differently.

I hope your greatest takeaway from my blog post today is that those who live with mental illness are just like everyone else. They are just wired differently.

They have the same hopes and dreams you have. They long for a fulfilling career, a loving relationship, and beautiful children to raise.

They love their family and friends. They worship God. They love Starbucks and books and reality shows.

And although they face challenges you can’t wrap your mind around, they also face the same struggles as everyone else.

If you take the time to get to know someone who is mentally ill, you will learn that you are more alike than different. And you just might find they add value to your life that you never even knew you needed.

Change starts with one person standing up and challenging the ignorance that has been accepted as truth. When you share these truths about mental illness you chip away at that ignorance.

Change won’t happen overnight, but even if we are only educating one person at a time, we are still incrementally making progress. If we stand firm in our desire to change the way the world views the mentally ill, we will get there in time. Subscribe to my email list to receive weekly devotionals and my latest blog posts jam-packed with actionable steps to help you spread awareness about bipolar disorder—and other mental health concerns. As an added bonus, when you subscribe, you will receive a free download of my top five favorite online bipolar disorder resources. You won’t want to miss it!