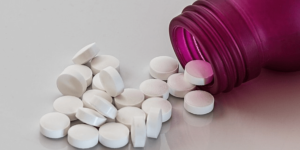 Let me get my soapbox out from under my bed and dust it off. I am not one to preach. I am not an angry person. It takes a lot to set me off.

I am not talking about people who quit taking medication because of debilitating or life-threatening side effects. There are legitimate reasons to quit or change medication. This post is directed at the mentally ill who willfully quit taking their medication without a sound medical reason.

One time, someone close to me was prescribed a mood stabilizer and just decided she didn’t need them and wouldn’t take them. I was so angry that I staged a one-woman protest. I skipped my nightly dose of medication as I sulked about this person’s audacity.

When I woke up the next morning, I was still angry. But I realized my one-woman protest would hurt no one but myself. So I promptly took my morning dose of medication and never skipped another dose.

I have been managing bipolar disorder for over twenty years. I have heard countless reasons why the mentally ill quit taking their medication.

Here is my response to five of those reasons:

1. I quit taking my medication because I feel better.

I understand the temptation to believe that because your symptoms are gone, you aren’t really sick. And maybe you will be okay for a while without your medication. Until you aren’t.

The reason you feel better is because the medication is doing its job. The only way to sustain that wellness is to accept your diagnosis and take your medication as prescribed.

2. I don’t like the way my medication makes me feel.

You are preaching to the choir on this one. When I was first diagnosed with bipolar disorder and began taking medication, I hated the way it made me feel. I felt numb.

There were also cognitive implications. I used to have a photographic memory. I could read something twice and be able to visualize the information on the page. I can’t do that anymore.

I now have the memory capacity of Dory from Finding Nemo. I have to work twice as hard to learn things and remember them.

Do I hate it? Yes, I do. Is it a reason to stop taking my medication? I don’t think so. As human beings, we are adaptable creatures. We can learn how to compensate for any deficiencies our medication causes.

3. My medication is making me fat.

The first antipsychotic drug my psychiatrist prescribed me caused a twenty-pound weight gain in about two months. Was I happy about that? No. Did I quit taking my medication? Of course not! Because I decided twenty-two years ago that I would much rather be fat and sane than skinny and crazy.

At some point, I had to be honest about my weight gain. The medication may have given me the predisposition to gain weight, but it didn’t make me eat an unhealthy diet. I can’t eat cake and drink Sonic Route 44 root beers and be surprised when the number on the scale reflects my unhealthy habits.

The sad fact is that some medications cause weight gain—at least initially. But in most cases, it is the person’s bad eating habits that keep the pounds on. 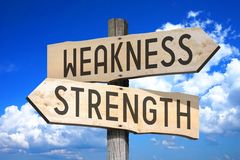 These are the people who believe they can overcome mental illness by pulling themselves up by their bootstraps. This excuse is simply not true. It takes courage and character to acknowledge that you are powerless over your brain chemistry.

There will always be people who consider you weak because you take medication. Those are not your people.

5. If I have enough faith, God will heal me.

I just stood up a little straighter on my soapbox! I am a devoted follower of Christ. I have prayed and have witnessed people healed from many illnesses.

I have also prayed and watched people not be healed. The people not healed weren’t any less faithful. Their prayers were not any less effective. Sometimes God heals, but many times He doesn’t.

If God wanted to heal someone’s mental illness, He could. There is no doubt many Christians living with mental illness long to hear from God that they have been healed.

God has made it clear to me that I will not be delivered from bipolar disorder. And if I am being completely honest, even if I heard the voice of God Himself telling me He healed my bipolar disorder, I would still take my medication in case I heard wrong.

Because sometimes people hear what they want to hear. Continuing my treatment plan would not be about disobeying God but about remaining healthy so I can edify Him with my life. I believe God appreciates my diligence in managing my disease.

I would never belittle someone who truly believed that God healed their mental illness. But I would advise them to be sure it was indeed God they heard from and not a manifestation of their disease.

The Moral of the Story

The bottom line is that if a mentally ill person looks hard enough, they will always find an excuse to quit taking their medication.

Your bad choice doesn’t only affect you. There is a ripple effect. The reverberations are felt long and wide.

Those who love you the most suffer too. And for those in your circle of influence who are fighting their own battles with mental illness, they feel a whole other dimension of repercussions. They may decide if it was okay for you to quit taking your medication, then maybe it is okay for them to follow suit.

Ditching your medication is easy until it is not, and the sad truth is it may take twice as much medication to make you half as stable as you were before you quit taking it.

What excuses have you or someone you love made to quit taking their psychotropic medication? How did that work out in the long run? Share your experience in the comments. 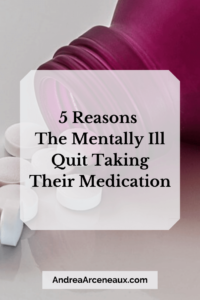