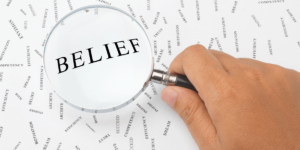 A limiting belief is any belief that holds you back from reaching your maximum potential. People acquire limiting beliefs when they draw incorrect conclusions about the events that have occurred in their lives.

Here are four limiting beliefs that stop the mentally ill from pursuing their dreams and four powerful truths to crush them:

1. I am damaged goods because I am mentally ill, so I don’t have value to add to the world.

When you live with mental illness, there is always a temptation to allow your diagnosis to define you. Your brain is wired differently than most people, and it is easy to believe you are inferior.

Don’t fall into the trap of believing that you are damaged goods because you are mentally ill. Here’s a revelation for you: Everyone has been damaged by life, whether or not they are mentally ill. It is the nature of humanity.

Unless you were born yesterday, obstacles and failures have been a part of your journey. Everyone has negative baggage they have picked up during the process of living. Just because your baggage tag says “mental illness,” it doesn’t mean that you have less value.

Although I live with mental illness, I still have value to add to the world.

Do you realize you have a story to tell no one else can write? You may feel damaged by mental illness, but those places that seem the most broken are the ones God will use to unlock someone else’s prison. Your broken pieces might help someone else put their own broken pieces back together.

God has gifted you with special talents that the world needs to see. If you believe the lie that you are damaged goods, someone, somewhere will miss out on what they needed you to do or say.

2. I will never live a big life because I am mentally ill.

I must admit that this limiting belief defined my life for more years than I would like to admit. It seemed every time I stepped out to do something of significance, bipolar disorder swatted me down.

When you live with unrelenting symptoms, it is easy to believe that your life will always be about managing your disease and simply surviving. You believe that a big life and big dreams are for other people. Normal people. People who don’t share your diagnosis or history.

Although I live with mental illness, I still have the right to live a big life.

Mental illness does not disqualify you from the right to live a big life. It does not bar you from dreaming big and following those dreams wherever they lead.

Keep in mind that your big life won’t look like everyone else’s, and that’s okay. Make the choice to live outside of your comfort zone, and make those choices based on what you want your life to look like in the future, not what it looks like today. Don’t let your small past detract from your big future.

3. I can’t be my authentic self because my mental illness will cause everyone to leave.

This is tough because when you are mentally ill, people leave. That’s the harsh reality. Mental illness adds another level of struggle to relationships—whether it is a romantic relationship or friendship.

When your symptoms become severe, there will be those who can’t handle them. Depression, mania, anxiety and psychosis are hard for outsiders to understand because they have no frame of reference in their own life. It is difficult to separate the symptoms from the person.

It would be a natural inclination to shy away from showing your authentic self to others because of the level of misunderstanding and rejection you have faced.

Mental illness may make it challenging for some people to embrace my authentic self, but the people who belong in my life, and who will help me make my dreams a reality, will separate my symptoms from my character and stay anyway.

Remember that if someone leaves because your mental illness is too much for them, it is their loss, not yours. You are not the sum of your symptoms. Your disease is a small part of a beautiful bigger picture.

You are a person with many facets. Your mental illness is just one of them. The right people will separate your diagnosis from who you really are.

This is the time to find your people, or as it says in the Bible, “separate the wheat from the chaff.” Your tribe of friends and supporters does not have to be extensive. They just need to be the right people for you.

I would rather have five loyal friends in my support system cheering me on than a hundred fake friends who don’t accept my authentic self.

4. If I get my hopes up about pursuing my dream, I will be disappointed when I fail.

Any dream worth pursuing takes hard work, perseverance and time. There will be failures. Failure is a natural part of the process of going from idea to fruition.

Living with mental illness adds a whole new dimension to the challenge. It will be harder for you because you are mentally ill. Not because you aren’t capable, but because there will be detours along the way.

There will be times when you must step back from your dreams for a minute and regroup. That’s just the reality of living with mental illness. Staying well is always the number one priority.

Dreams and aspirations can’t come to fruition if you are not healthy. The way you view those detours will determine how willing you are to fight for your dream.

There may be failures and detours along the way, but I will pursue my dream anyway. I will use the obstacles as stepping stones, and I will use failure as a training tool for future success. 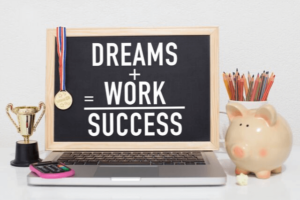 The truth is, everyone faces obstacles on their path to success. Your obstacles may look a little different because you live with mental illness, but that doesn’t mean you can’t rise above them and continue your journey.

Making a dream become a reality is an incremental process. For every failure, there will be a small success. Shake off the failure and learn from it. Then take the small success and build from it.

Success is a series of steps. When you fall down, stand back up and take the next one.

“Then the Lord said to me, ‘Write my answer plainly on tablets, so that a runner can carry the correct message to others. This vision is for a future time. It describes the end, and it will be fulfilled. If it seems slow in coming, wait patiently, for it will surely take place. It will not be delayed’” (Habakkuk 2:2-3 NLT).

I challenge you to sit down and write out the secret dream that has been living in your heart for years. The one you never say out loud because you don’t think it’s possible.

Take out your journal and write down every reason you think it won’t work. Examine the limiting beliefs that are blocking you from moving forward and then crush them one by one.

Replace those lies with these truths: You are important. You add value to the world. There are things that God wants done that only you can accomplish.

Write down the first step and take it and then take the next step and the one after that. Keep taking those steps until that dream becomes a reality. You can do it.

What is your dream? Has navigating mental illness led you to embrace limiting beliefs that stop you from pursuing it? Tell me all about it in the comments. 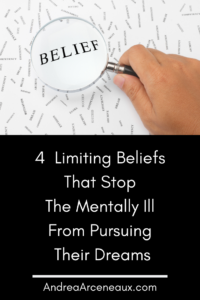