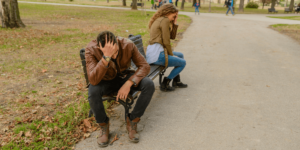 And then there was the girl’s friend. Upon receiving her diagnosis of bipolar disorder, her psychiatrist told her not to bother getting married because those with bipolar disorder have a higher divorce rate.

Harsh? Yes. But oh so true. The statistics don’t lie. People who live with mental illness are more likely to struggle with relationships. The mentally ill are more inclined to get divorced. Relationships are hard to navigate under optimal circumstances. When you throw mental illness into the mix, the waters become treacherous.

My husband and I have been together for almost seventeen years—married for nearly thirteen of those years. It has not been a walk in the park, but we are still standing. But I have to admit, if my husband wasn’t the man he is, we probably wouldn’t still be together.

There are four reasons people with mental illness struggle with relationships:

1. The mentally ill are always waiting for the other shoe to drop.

People leave. All the time. And when you are mentally ill, it is usually not a matter of if but a matter of when. After a while, you get used to people leaving, so you are on high alert all the time.

Every time the phone rings and every time your significant other wants to talk, you are sure it is the end. Or you self-sabotage. You create a toxic environment and have the attitude that if they will leave anyway, at least you will be prepared. Or you will leave first.

A common thread in all of my attempts at relationships was the desire to know where I stood. I always wanted to quantify a relationship, even in the early stages. I wanted someone to pick me, love me, walk with me and fight this battle with me, but until I met my husband, everyone left.

2. People who are mentally ill feel damaged, so they make poor relationship choices.

One of my favorite quotes is from the book, Damage, by Josephine Hart: “Damaged people are dangerous. They know they can survive.”

If I am completely honest, I do feel damaged. And because of that belief, I have chosen the wrong men. I have settled when I should have moved on. I have believed the lie that no one would love me and stay with me because I live with bipolar disorder.

It doesn’t even matter if the belief is true or false. You live what you believe. If you believe you are damaged goods, you will act accordingly. You believe the person in your life is doing you a favor by staying with you. You put yourself in situations where you are treated poorly or abused—all in the name of wanting love at any cost.

3. When you are mentally ill, your libido waxes and wanes.

Sex is not a subject I feel comfortable talking about. I am a 48-year-old woman who whispers the word sex. But you can’t talk about difficulties in the relationships of the mentally ill without mentioning sex.

Sexual intimacy is an important part of any healthy relationship, but mental illness gets in the way sometimes. Some medications kill your libido. Depression brings your sex drive to a standstill. It is hard to feel sexy when you are hearing voices and are delusional. I’ll be honest. On most nights, I would rather go to sleep.

During mania, libido ramps up and hypersexuality kicks in. When paired with poor impulse control, some who are mentally ill will fulfill those desires outside of their relationship—even if they are married.

4. Most people can’t separate the symptoms of mental illness from who the person really is.

When someone who is mentally ill is in the throes of an episode, the symptoms are harrowing. Mania. Psychosis. Overspending. Impulsivity. Hypersexuality. Destructive words are spoken that you can never take back.

Things get ugly quick, and there is no reliable timetable to tell your significant other how long the episode will last. As the days, weeks and months go by, you stop being an actual person and become a list of symptoms.

You don’t have to be one of the statistics. If you know what the pitfalls are, you can prepare for them. When you are in the dating fishbowl, remember you are not the sum total of your symptoms, and throw the unsuitable, unworthy fish right back into the sea.

Know your worth and don’t settle. You are worthy of love. Your brain chemistry may be flawed, but that doesn’t mean you have to settle for being damaged goods.

Don’t scramble looking for a romantic partner because you think your mental illness limits your choices. You are in the driver’s seat. Choose wisely.

Remember, what the world says about you is not important. What is important is that you believe what God says about you: “You are altogether beautiful, my darling, beautiful in every way” (Song of Solomon 4:7 NLT).

You were created by an all-loving God, and you were created specifically to give and receive love. Internalize that truth, and settle for nothing less. 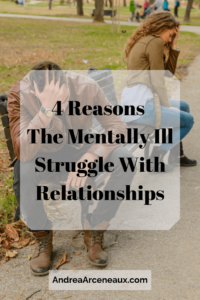