Today I have the privilege of sharing the story of Maria’s personal experience with obsessive-compulsive disorder (OCD).

According to the National Institute of Mental Health, “obsessive-compulsive disorder is a common, chronic, and long-lasting disorder in which a person has uncontrollable, reoccurring thoughts (obsessions) and/or behaviors (compulsions) that he or she feels the urge to repeat over and over. These symptoms can interfere with all aspects of life, such as work, school, and personal relationships.”

Today Maria shares the challenges and triumphs of her mental illness journey. So, without further ado, let’s look at the world of obsessive-compulsive disorder (OCD) through Maria’s eyes.

I’m Maria, mental health advocate, blogger and graphic designer. I also happen to have a severe mental health disorder: obsessive-compulsive disorder (OCD). Today, I live really well with my disorder, but that wasn’t always the case. There was a time when the world was a dark, scary, and overwhelming place for me.

I am married to my wonderful husband, Bruce. I am an aspiring cat lady and animal rescuer of three cats, Pickle, Ulysses and our latest foster fail, Meaty. I love drawing, writing, and creating digital art that makes people happy. Bruce and I look forward to building our own homestead in a couple of years and learning to live more sustainably with the land.

It’s funny, it wasn’t until my life was on an upswing that I realized I needed professional help. I had just gotten married, had a good job, and really was doing “well” in life. But the stress of being a perfect wife in a new marriage and an employee at a really demanding job drove me over the edge, sending me to rockiest of rock bottoms emotionally.

To survive as a child in a chaotic upbringing, I had to become very insular and hide my hurts, no matter how bad they were. This toughness pervaded my adult life, and I figured I just had to “push through” the bad feelings or else I was weak. Because of that cognitive distortion, even when I admitted I needed help, I had no idea how to ask for it. All that kept me from getting real clinical help until I was almost 30 years old and on the verge of suicide.

I have a lot of symptoms from different disorders, but the ones from posttraumatic stress disorder (PTSD) and obsessive-compulsive disorder (OCD) were the most shocking; it was almost like being possessed.

I have Harm OCD, which is a subset of classic obsessive-compulsive disorder. I have obsessive thoughts that I’ll lose control somehow and hurt or kill someone I love. The compulsions lead me to be extra careful around everyday objects like kitchen knives, cars, and pillows. Harm OCD is difficult to explain to others because it sounds so awful and people can’t really understand if they haven’t experienced the ruminating thoughts themselves.

If I was triggered—and at my lowest, I was triggered by just about everything—it was as if a stranger took over my body. I could be myself at one point, happy, joking, loving and laughing. Without warning, this other cold, angry personality would take over in an instant.

All the emotions would bubble up in my body to the point where I just wanted them out, making me do really weird things with my body like flail, hyperventilate, and curl up into really unnatural positions.

I remember one instance I was having such terrible, violent emotions and uncontrolled body movements I did an honest to goodness backflip and hit a wall. It was like a scene out of The Exorcist. I would also scream, yell, have fits of rage fueled by paranoia, and hit myself and the wall. 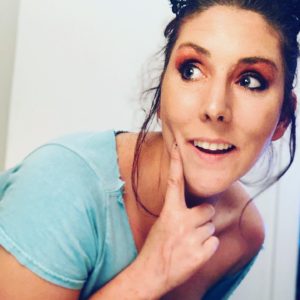 I sought professional help after a suicide attempt and months of consistent suicidal ideation and self-harm. I woke up one day, after another brutal nonsensical night of paranoia and fighting with my husband, and I realized how much I was hurting my loved ones and myself.

I went to the ER that same day and told them everything. I ended up being put on a three-day hold where I received medication and three diagnoses that saved my life.

Oh my gosh, I was SO absolutely relieved to learn my diagnosis. Having a diagnosis meant I could get the proper help both clinically and medically instead of trying to heal in the dark without a direction. It was like an enormous weight was lifted off my shoulders and the burden of trying to “fix myself” alone was finally gone.

Most of my symptoms like depression and panic disorder stemmed from dealing with severe anxiety for such a long time. A high dose of antidepressants really, really helped me with my obsessive-compulsive disorder (OCD) and panic symptoms.

I took part in a month-long intensive outpatient program that focused on exposure response prevention, which is the best treatment out there for anxiety disorders. I also took part in a lot of dialectical behavioral therapy to help me relate to stress and triggers better.

I meditate, exercise, write, and have completely switched careers, so I can manage my disorders properly.

I’d say my life today is incredible, awe-inspiring, and fuller than I’d ever known it could be. That doesn’t mean there aren’t serious downs or that my illness doesn’t rear its ugly head once in a while. It’s just means that I have so much more control over my life than I did before.

That’s because I have a wider support circle, a ton more knowledge and more tools to combat my anxiety. All that gives me courage to hit those challenges head on and life a full life with mental illness.

The one thing I wish people knew about mental illness is that we can live amazingly beautiful lives, even with the challenge of chronic mental illness. It may not seem possible right now if you’re really struggling, but real healing does exist, there are ways to get support, and you’re not alone. You may never be free of mental health challenges, but you can create a life that makes room for both your challenges and your happiness.

Maria’s story is a reminder that you can still live a big, beautiful life even if you struggle with mental illness. A mental illness diagnosis does not sentence you to a small life.

Maria has turned her mental illness journey into a passionate search for truth and understanding. She probably doesn’t know this, but she is one of my favorite mental health awareness bloggers. She has created a wonderful community filled with a plethora of helpful resources. All her articles are well-researched and highly informative.

Maria’s blog, My Soul Balm, has hundreds of articles on everything from self-care guides to mental health education to social justice in the mental healthcare field. Whatever you’re looking for, there’s a good chance it’s there. She also has lots of fun stuff on the site too because she believes mental health doesn’t always have to be so serious.

For more information on obsessive-compulsive disorder, check out the National Institute of Mental Health’s informative article.

For more information on panic disorder, check out the National Institute of Mental Health’s informative article.

You can follow Maria on her blog, My Soul Balm, on Facebook and on Instagram. She also had two Facebook support groups: Wonder Women: A Mental Health Support Group and Encouragement and Accountability Group for Neurodivergents.