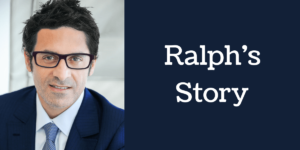 When Ralph Macey reached out to me about doing a guest post for My Big Fat Bipolar Life, none of his ideas resonated with me, but I gravitated to one detail about his life: Ralph has an aunt who has schizophrenia, and he has been her caregiver for the past two years.

If you follow my blog, you know that what I do well is combine the facts about mental illness with an individual’s personal account of navigating it. I love doing that because it demystifies mental illness and helps the reader understand in a more tangible way how it affects people.

Today I am excited to say that Ralph Macey is the co-author of this post. He will share his personal experience with being his aunt’s caregiver, and I will weave the facts about schizophrenia throughout his story. His aunt has chosen to remain anonymous, so for the purposes of this blog post, we will call her Jane.

Ralph was treated for anxiety and depression when he was 13 years old. What he saw at the mental health clinic troubled him. He saw uncontrollable kids in worse condition than he was, and parents who were concerned what would become of their adult mentally ill children once they were gone. His experience at the clinic sparked an interest in helping those who face ongoing mental health challenges.

The other thing that made Ralph want to serve in the mental health care community was the psychiatrist who treated his anxiety and depression. His psychiatrist’s warm and loving approach made an impact on him and strengthened his resolve to be part of the solution for those who suffer with mental illness.

Ralph has been a Care Coordinator in the Marketing and Communications department of SavantCare for 12 years. His position gives him the opportunity to spread awareness about mental illness and encourage others to seek professional help, so they can live a full life.

Ralph did not plan on becoming his Aunt Jane’s caregiver. She is his maternal aunt, and all her children work in outside the United States. She was completely alone, and his cousin was always worried about her, so he asked Ralph to become her caregiver. Ralph has been caring for his Aunt Jane for two years.

According to the Mayo Clinic, “schizophrenia is a serious mental disorder in which people interpret reality abnormally. Schizophrenia may result in some combination of hallucinations, delusions and extremely disordered thinking and behavior that impairs daily functioning and can be disabling.”

According to the National Institute of Mental Health (NIMH), “symptoms of schizophrenia usually appear between the ages of 16 and 30. In rare cases, children can have schizophrenia too.”

Cognitive symptoms are not easily seen but make it difficult for those with schizophrenia to care for themselves or hold down a job. A person’s level of cognitive function is a strong indicator of the person’s ability to improve their overall functionality. Cognitive symptoms are often only detected when specific tests are performed.

How does my Aunt Jane behave when she is symptomatic? Oh. It’s hell. Whenever her medication is not working properly, her schizophrenia symptoms rise to the surface.

Aunt Jane becomes extremely stubborn. If you don’t listen to her, she becomes aggressive and shouts at the top of her lungs. She will not stop hurling abuse until you follow her wishes.

Aunt Jane’s aggression and anger level soar when she is not well. It is as if she is burning with rage. One minor mistake and all hell breaks loose. She will hit me and fight with me, and it’s tough to tame her. I don’t know where she gets so much physical strength.

Sometimes Aunt Jane speaks to imaginary people. One day I heard her speaking in the kitchen. When I looked, there was no one there. When I questioned Aunt Jane, she said she was speaking to someone, but she went silent when I asked for his name. She asked me to stop interfering in her personal interactions with others.

Aunt Jane also experiences irrational thoughts. One day she told me to go to the zoo and feed the animals. When I asked her the reason, she said that she was doing charity work for her well-being.

Sometimes Aunt Jane acts inappropriately. One day, a friend of mine came to my aunt’s apartment. At first, she refused to let him enter and was hurling abuse at him. After I threatened to leave, she allowed him to enter. My friend was crying about the nasty break up he was going through. Suddenly, my Aunt Jane started laughing. I was utterly embarrassed.

At times, my Aunt Jane also becomes very suspicious. A year ago, she locked every room of her apartment, and accused me of stealing her money, pots and pans.

Sometimes, when Aunt Jane watches television, she feels that the actors in the programs can see her, so she doesn’t talk or change her clothes in front of the television. When she is experiencing this symptom, she can’t watch movies.

When my aunt is symptomatic, it becomes tough to handle her. I don’t challenge her. I follow her wishes until I take her to her psychiatrist. I try my best to keep her happy. I don’t react to her tantrums. I keep on giving her the prescribed medicines until the psychiatrist changes them during our next visit.

Psychosocial interventions help patients learn how to navigate the everyday challenges of schizophrenia and are most helpful once the patient finds medication that helps their psychosis recede.

Aunt Jane takes three different types of atypical antipsychotics. Fortunately, my aunt is medicine compliant. She likes her psychiatrist and has faith in the medication. Because her medication makes her feel better, Aunt Jane doesn’t fight me to take it.

Aunt Jane has a monthly appointment with her psychiatrist, and she has done individual therapy to help her have more logical thinking patterns.

Ralph’s Life with His Aunt Today

We are happy. We are surviving the ups and downs. Aunt Jane behaves normally these days. No one would believe she is schizophrenic unless I revealed it.

When Aunt Jane was symptomatic, she rarely spoke to anyone. Now she chats with friends and family every day. She misses her children terribly, and her eyes gleam with joy when they call her. She hopes they will come back to live in the United States someday.

Since she has been well, Aunt Jane has shown an interest in jewelry, clothes, skincare products, and she is more aware of maintaining her personal hygiene. She loves shopping and evening strolls in the park. She brings food to sick neighbors and checks on her elderly neighbors.

Aunt Jane supports my work. She loves to cook and prepares a variety of meals for me. She packs lunches for me, and when I am working at home, she doesn’t disturb me. She enjoys playing games on her smartphone, watching movies and napping.

What she is not good at is keeping things organized, so I try to take care of that for her. She has a strong intellect and sharp memory. Sometimes, she must remind me to pay my bills!

I don’t know what will happen in the future, but I know one thing for sure. I won’t leave her. Aunt Jane is part of my life. She is a part of me.

Schizophrenic patients are not mad. They live in a dual world. Psychiatrists help them come back down to reality.

Being a caregiver for someone with mental illness is difficult because you must always be on high alert. I must make sure Aunt Jane is taking the proper medications at the proper dosage at the proper time.

The caregiver must observe the minute changes in behavior, sleep patterns and thought processes. Having an abundance of patience is crucial. You must always overlook the tantrums and maintain an empathetic attitude toward your patient.

Schizophrenia can’t be cured, but people can manage their symptoms with medication and therapy. Be gentle with them. Medication and therapies solve 60% of the problems. The other 40% can be solved with the cooperation of the family.

Mental illness is not one size fits all. It is as individual as the person experiencing it. Instead of being fearful about what we don’t understand, we should educate ourselves so we can remember that those who live with mental illness—even debilitating mental illness—have the same hopes and dreams as everyone else, and with the proper treatment, they can live a full, productive and meaningful lives. 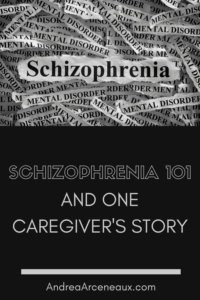