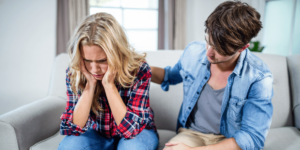 Last year on World Suicide Prevention Day, I received the call no one wants to get. A close family member had died by suicide. We were all left reeling, no one more so than his wife.

It wasn’t long before people were saying the thoughtless things they always say when someone dies by suicide. My outrage led me to write a post about five of those damaging statements.

I knew there had to be a better way to support someone who has lost a loved one to suicide. Surely, I would do better, right? After all, I am a mental illness awareness blogger whose mission is to change the conversation about mental illness and suicide.

I have a confession to make. I have failed miserably with my sister-in-law. I had the right intentions in my heart, but I did what most people do. I shared my condolences, went to the memorial service, offered my support half-heartedly, and then I went on with my life.

It is not that I don’t think of her and the enormity of her grief. I do. Every day. It’s just that I haven’t been intentional about taking the thoughts out of my head and turning them into an action plan that would lift her up as she walks through her grief.

It’s my failure to act that caused me to sit down and come up with a plan of what to say and do, so maybe you can learn from my mistakes how to better support someone if they lose a loved one to suicide.

I think the reason most people say nothing when someone dies by suicide is because they don’t know what to say. There is no rulebook, and when people don’t have the language to express what’s in their hearts, they often stumble and even say damaging things. 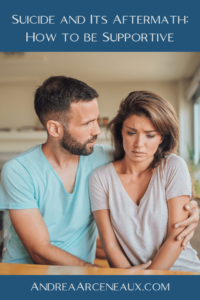 So, what do we say and do to support someone who has lost a loved one to suicide?

Here are three statements to get you started:

1. I don’t understand what you are going through, but I want to be a part of your healing journey in any capacity you need or want.

I believe the biggest misstep that people make when speaking to someone who has lost a loved one to suicide is trying to express a shared grief experience.

Yes, we all want people to understand and empathize with us as we grieve, but the reality is we do not understand what they are going through. Even if we have lost someone suddenly, without warning, it is not the same loss as a suicide.

When someone loses a loved one to suicide, there is a level of blame and raw loss that we can’t fathom. There may even be an overwhelming sense of worthlessness because they believe that somehow if they were “enough,” the suicide wouldn’t have happened.

By intimating that you relate to what they are experiencing, it almost cheapens their feelings because it is such a deeply personal loss.

A better way to be supportive is to admit that you do not understand what they are going through, but you care about them and want to be a part of their healing journey in any capacity they need or want.

2. I don’t know what to say, but I am here to listen without judgment.

Suicide is such an isolating event. People don’t know what to say, so they say nothing, or worse, they say the wrong thing.

They don’t know if the person wants to talk about their loved one’s suicide, so they say nothing—under the guise of letting that person have their space.

They may even believe that saying nothing is better than saying the wrong thing. And while it is important to avoid damaging statements, it is more important to push through the awkwardness, so you can tangibly reach out to your loved one who has probably never felt more alone in their life.

A better way to be supportive is to admit your ignorance and lack of eloquence and offer a listening ear. Sometimes the best thing we can do to help others is to be quiet and just listen.

3. Even if you don’t want to talk about your loved one’s suicide yet, I am available to sit with you while you grieve.

I believe that even the person who has lost a loved one to suicide rarely has the words to articulate their deep feelings of loss. Grief and loss muddle the person’s mind, all while having to make choices they thought they wouldn’t have to face for years.

They are bombarded by people during those first days following the suicide and at the funeral, but then everyone leaves, and they are left alone to process their grief.

There is an assumption that the grieving spouse or partner has a support system in place, but many times they don’t. We leave them alone in their immense sorrow, trying to put back together a puzzle that is now missing a crucial piece.

A better way to be supportive is to offer to sit with them while they process their grief. Let them know you are there if they need to talk, but you are also there if they don’t have the words yet. Never underestimate the comfort you can provide to someone just by seeing their grief and sitting with them as they feel it.

There is no shame in not knowing what to say when someone dies by suicide. Don’t be so eager to say something that your words do more harm than good.

And while you shouldn’t rush to say something, you still must find a balance because silence speaks volumes too. It’s okay to stumble on your words and admitting your ignorance about what to say and do is a good place to start.

Make the choice to be intentional about being there for your friend or family member. Never utter the words, “You are not alone,” unless you are sincere and stand ready to tangibly offer your support.

If someone you know is struggling with suicidal thoughts, please use the following resources to help them get professional help:

Veterans Crisis Hotline—Call 1-800-273-8255 and press 1 to connect with caring, qualified responders from the Department of Veterans Affairs. Many of them are Veterans themselves. You can also send a text to 838255.

The American Foundation for Suicide Prevention provides a wealth of information about how to handle a suicidal friend or loved one. Read their blog post that outlines the ways to start a real conversation (#RealConvo) about suicide with someone in crisis. Click here to read that blog post.

Read my blog post that outlines five steps to help someone who is suicidal. 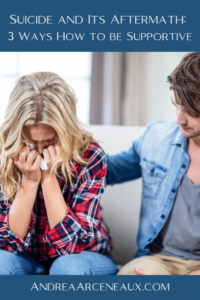