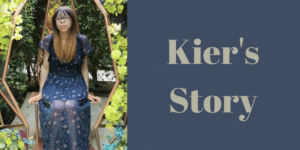 Most of us know the basics about anxiety and depression, but borderline personality disorder (BPD) is very misunderstood.

According to the National Alliance on Mental Illness (NAMI), “Borderline personality disorder (BPD) is a condition characterized by difficulties regulating emotion. This means that people who experience borderline personality disorder (BPD) feel emotions intensely and for extended periods of time, and it is harder for them to return to a stable baseline after an emotionally triggering event.

“This difficulty can lead to impulsivity, poor self-image, stormy relationships and intense emotional responses to stressors. Struggling with self-regulation can also result in dangerous behaviors such as self-harm (e.g. cutting).”

Over the years, society has attached unfavorable stereotypes to the diagnosis. Today Kier puts a name and a face to the controversial mental illness. Let’s take a moment to look at the world of borderline personality disorder (BPD) through her eyes.

Hi, my name is Kier, and I am a mental health blogger and freelance writer. I was diagnosed with depression and anxiety at 13 but struggled with my mental health for many years afterwards. For 10 years, I was the queen of self-destructive behaviors and unhealthy coping mechanisms, with no idea why! It was only after I was diagnosed with borderline personality disorder (BPD) that everything finally made sense, and my journey to recovery began.

I love reading, baking, and writing. Writing has been a comfort for me ever since childhood. It allowed me to escape the chaos of my mind and channel all my angst into creating wild, action-packed stories. These days, I use writing to help me understand my messy borderline personality disorder (BPD) emotions a little better, all while trying to raise awareness and reduce stigma.

Borderline personality disorder (BPD) has been slowly poisoning every aspect of my life since I was a teenager. From a young age, I was terrified of being abandoned and would become unhealthily attached to my friends, falling in “love” with anyone I grew close to.

I was unsure about my career prospects and bounced from one course or job to another. I also suffered from intense and uncontrollable mood swings, often followed by periods of suffocating emptiness that I would try to cure with alcohol or recreational drugs.

For a long time, I thought my behavior was because of depression, anxiety and—well—maybe I was just “crazy.”

Things took a turn for the worse when me and my boyfriend went on a backpacking holiday to Australia. Staying in party hostels with my boyfriend (who I was already unhealthily dependent on) was a recipe for disaster. I lost touch with reality, spiraling into the dark abyss of intense borderline personality disorder (BPD) symptoms.

I have always had self-identity issues, but as my borderline personality disorder (BPD) became worse, my sense of identity grew dangerously unstable.

I felt devoid of personality unless I drank or abused drugs. My relationship became toxic because unless I was physically beside my boyfriend, I felt as though I did not exist. I even resorted to self-harm because I felt so uncomfortable in my skin.

Every single emotion I felt was so painful; it was debilitating. I was a slave to the intense anger, suicidal despair, and overwhelming fear—acting on every erratic impulse even if it was irrational.

The fear was the most harmful because it spiraled me into blind panics, convinced that abandonment lurked behind every slightly off-hand comment. If I felt as though abandonment was imminent, I would succumb immediately to destructive, toxic behaviors—hysterical crying fits, desperate manipulation, threats of suicide and excessive drug-taking, just to name a few.

I did not understand why every emotion hurt so much, and I felt unable to control my explosive reactions to them. My self-hatred grew deeper by the day, to the point that I attempted suicide because I believed that I was a terrible, crazy person who was beyond any help. 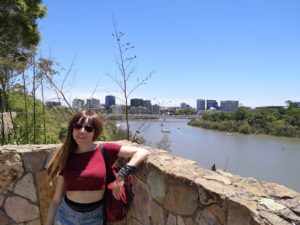 After my suicide attempt, I was put back on antidepressants and saw a psychologist I had worked with before. My official diagnosis was borderline personality disorder (BDD) with major depression and anxiety.

I was conflicted about my diagnosis. On the one hand, I was relieved that I finally had an answer for all my strange behavior. I wasn’t an anomaly, and I wasn’t just “crazy”—I had a legitimate mental illness. It was a comfort to know that I wasn’t alone.

As much as I hated my strange behavior, over the years it had subconsciously become part of my identity. When I learned that this mental illness had governed my mind for the last 10 years, I almost felt even more unstable. Who was I without borderline personality disorder (BPD)? Was I anyone at all?

I’ve been on a variety of antidepressants since the age of thirteen. I started off with selective serotonin reuptake inhibitors (SSRIs) but found the side-effects to be intolerable. I also used to be irresponsible with them and would stop and start depending on my fluctuating moods, which only made my symptoms worse.

Before my official diagnosis, I was prescribed antipsychotics, which did nothing but give me brain-fog that intensified my feelings of emptiness. I also tried anti-anxiety medication, but because of their addictiveness and my impulsive behavior, I decided that they weren’t worth the risk.

As of now, I take a very low dose of a noradrenergic and specific serotonergic antidepressant (NASSA) to help me sleep (Don’t even get me started on my insomnia issues!), but I’ve learned that a combination of cognitive behavioral therapy (CBT) and positive coping strategies works best for me. It has taken a lot of trial and error, though!

I still spend a lot of my time internalizing intense emotions, but these days I’m pretty good at calming them. I can easily identify irrational thoughts and fears too, which makes their emotional impact a lot less painful!

As I continue to understand and embrace my illness, I’ve almost learned to be free of it. Borderline personality disorder (BPD) is still there, but it’s no longer the terrifying monster that it once was. I still get periods of depression that try to encourage my borderline personality disorder (BPD) symptoms, but I’ve found that mindfulness is an excellent tool in those situations! I use mindfulness, journaling, affirmations, and lots of other self-care tricks to stay positive.

Borderline personality disorder (BPD) comes with a lot of negative stereotypes like “crazy” or “violent.” I wish everyone knew that people with mental illness are a lot more likely to hurt themselves than hurt anyone else.

I hope that reading Kier’s story helped demystify and humanize borderline personality disorder. Because of the stigma attached to serious mental illness, people often forget that the mentally ill are more than the sum of their symptoms and ups and downs.

Kier made a very valid point that the mentally ill are much more likely to hurt themselves than anyone else. Instead of shunning the mentally ill because of fear and ignorance about what mental illness is and isn’t, we should offer those who face the intense struggles of serious mental illness—like borderline personality disorder (BPD)—our empathy and support.

The charity Mind, based in the United Kingdom, provided Kier with some great self-care tips for borderline personality disorder (BPD), and lots of information and resources.

The National Institute of Mental Health (NIMH) also has informative fact sheets on anxiety and depression. 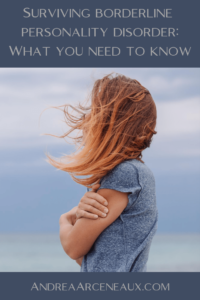