When I considered writing a blog post about pediatric bipolar disorder with advice for parents who are navigating it with their child, there was only one person I wanted to interview.

Rachel Foreman is a licensed clinical social worker and a community activist. For years I have followed her on Facebook as she recounted the challenges and triumphs of raising her son, Matthew, who has bipolar disorder.

I realized quickly after speaking to Rachel that the only way to do her story justice—and share the wisdom she has gained from being her son’s advocate for 13 years—was to tell it in two parts.

Matthew came into Rachel and Chris Foreman’s life when he was three weeks old. He would be 11 months old before he officially became the third Foreman child. Rachel had raised her husband’s two older children, so she had a frame of reference for the milestones and stages children go through.

Matthew was Rachel’s golden child. He was advanced in every way. His teeth came in early, he walked early, and he was articulate and precocious beyond his years.

Matthew was diagnosed with attention deficit hyperactivity disorder (ADHD) when he was three years old.  When his daycare teacher suggested he take medication for it, Rachel balked. Matthew was performing two years ahead of the other students in vocabulary. She felt medication was unnecessary.

Rachel’s world changed forever on November 13, 2006. When she picked Matthew up that day from aftercare, he was quiet, which was unusual. After some questioning, Matthew told his mom he was not thinking right, and that something was wrong with his brain. He wanted her to call the police to tell them he was bad, and that they should put him in jail. So began Rachel’s 13-year relentless search for answers and treatment to help her son.

The doctors may have been the expert in their field, but Rachel—like all parents—had the advantage of being an expert on her child.

In children, it is hard to distinguish between the normal everyday ups and downs of growing up and the symptoms of mental illness. What psychiatrists know now is that children present with mental illness differently than adults do.

According to the Juvenile Bipolar Research Foundation (JBRF), “studies have found that from the time of initial manifestation of symptoms, it takes an average of 10 years before a diagnosis is made.”

The Juvenile Bipolar Disorder Research Foundation (JBRF) also states, “Adults diagnosed with bipolar disorder seem to experience abnormally intense moods for weeks or months at a time, but children appear to experience such rapid shifts of mood that they commonly cycle many times within the day. This cycling pattern is called ultra-ultra rapid or ultradian cycling, and it is most often associated with low arousal states in the mornings (these children find it almost impossible to get up in the morning) followed by afternoons and evenings of increased energy.”

Children’s moods cycle so rapidly that the duration of the mood is not long enough to meet the adult DSM-5 (The Diagnostic and Statistical Manual of Mental Disorders) criteria for bipolar disorder. It is also hard to distinguish depression from bipolar disorder if the child does not present with mania.

According to the National Institute of Mental Health (NIMH),

Children and teens having a manic episode may:

Children and teens having a depressive episode may:

According to The Bipolar Child, “We have interviewed many parents who report that their children seemed different from birth, or that they noticed that something was wrong as early as 18 months. Their babies were often extremely difficult to settle, rarely slept, experienced separation anxiety, and seemed overly responsive to sensory stimulation.

“In early childhood, the youngster may appear hyperactive, inattentive, fidgety, easily frustrated and prone to terrible temper tantrums (especially if the word “no” appears in the parental vocabulary). These explosions can go on for prolonged periods of time and the child can become quite aggressive or even violent. (Rarely does the child show this side to the outside world).

“A child with bipolar disorder may be bossy, overbearing, extremely oppositional, and have difficulty making transitions. His or her mood can veer from morbid and hopeless to silly, giddy and goofy within very short periods of time. Some children experience social phobia, while others are extremely charismatic and risk-taking.”

When the pediatrician suggested that Matthew might have bipolar disorder, Rachel was not ready to accept that diagnosis. They knew Matthew had attention deficit hyperactivity disorder (ADHD), so the doctor gave him Ritalin to treat it. Twenty-four hours later, Matthew was hallucinating and aggressive. For the next two years they worked to bring him back down from the mania and psychosis.

Matthew’s major symptoms throughout the years have been extreme anxiety, irritability and aggression. He has always presented more on the manic end of the bipolar spectrum.

According to Rachel, “Matthew never knows when he wakes up what kind of day he will have.” Sometimes, Matthew could feel the “mean” coming on, and he would tell Rachel, and she would do her best to distract him, but it didn’t always work. Matthew’s eyes would change, and Rachel knew the switch had flipped.

Matthew would come out swinging, and sometimes Rachel would have to call the neighbors to help her hold him down. She never knew if it would last 30 minutes or three hours.

Matthew’s mental illness was relentless and led to behaviors that didn’t match his silly and thoughtful disposition. Even when Matthew was much better, it took a long time for him to trust himself again.

This led to extreme separation anxiety. Matthew never left Rachel’s side. He slept with her and even went to the bathroom with her. She was his comfort. Matthew knew that if anything bad happened, his mom would make it better. She would fix it. Rachel knew they had crossed over another hurdle when Matthew could attend baseball practice without her.

As Matthew gets older, his symptoms now fit into the traditional adult bipolar disorder symptomatology. Now when he experiences mania, he is giddy, agitated, hyperactive, has rapid speech and experiences sleep disturbances. These days he rarely gets past hypomania, a milder form of mania.

Doctors avoid prescribing antidepressants for depression and stimulant medications for coexisting attention deficit hyperactivity disorder (ADHD) because it can lead to mania.

All these therapies can provide education, support and guidance to the child with pediatric bipolar disorder and their family.

According to the National Institute of Mental Health, “these therapies teach skills that can help people manage bipolar disorder, including skills for maintaining routines, enhancing emotion regulation and improving social interactions.”

The medications that have consistently worked for Matthew are mood stabilizers and atypical antipsychotics. He has been in and out of psychotherapy, and as he grows older, the focus in therapy is on learning life skills.

Matthew has been hospitalized four times. In most cases, it occurred because his doctor was trying to tweak his medication to address his severe anxiety. Matthew’s doctors could never successfully add medication to treat his anxiety. Cognitive-behavioral therapy has helped him manage the symptoms.

Matthew’s diagnosis terrified Rachel when she first found out because she knew the prognosis was poor. She is a mental healthcare professional, so she knew that 25% of children with bipolar disorder try to kill themselves before they turn 18 years old. Matthew was six when he went into his mom’s bedroom and asked her to kill him because he did not want to live like that anymore.

Matthew was in and out of school because he could not function in a regular class. There was too much stimulation, he couldn’t focus, and Rachel found he performed best when he was on the homebound program. Because of his indomitable spirit and Rachel’s persistence, Matthew graduates from high school this year.

All Matthew ever wanted was to be normal, but Rachel’s prayer was always that Matthew would be happy. God answered that prayer. Rachel says Matthew is one of the happiest people she knows.

As for being normal, Rachel says, “Normal is a setting on a dryer.”

Rachel doesn’t know if Matthew will get married or hold a job. He is not going to college. She would be fine with him living in her backyard for the rest of his life if that meant he was happy.

Matthew’s dream is to go to the fire academy to become a firefighter, but he will take baby steps by attempting a part-time job before he makes that monumental leap. According to Rachel, “Matthew is intelligent but immature. He’s 18, but he acts like a 15-year-old.”

Now Rachel and her husband, Chris, argue with Matthew about being lazy and having a dirty room. They couldn’t be more delighted to be correcting him about mundane, everyday teenage concerns. 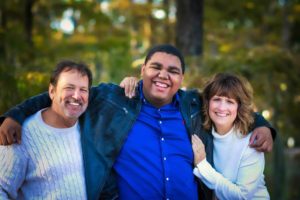 When talking about the bond between herself, Chris and their son, Matthew, Rachel said: “We definitely have that boundary of a parent and child, but it’s a different relationship because of the mutual respect we have for each other. We’ve proven ourselves to each other. It doesn’t have to be spoken.”

Rachel would tell you that Matthew is the hero of this story, and she is right. Matthew is a hero. But I believe there are three heroes here: Matthew, Rachel and Rachel’s husband, Chris. They went through something no family wants to go through, and they have thrived despite the challenges and setbacks.

Unfortunately, children do not grow out of pediatric bipolar disorder or any other mental illness. Surviving mental illness is an ongoing journey that never ends.

A Wealth of Wisdom

Rachel has gained a wealth of wisdom about parenting mentally ill children from years of advocating on Matthew’s behalf and being in the trenches with him battling mental illness for the past 13 years.

Next week, I will share Rachel’s parenting advice and wisdom in part two of this series.

The Bipolar Child is the definitive book on pediatric bipolar disorder by Demitri Papolos, M.D., and Janice Papolos. They comprehensively detail the diagnosis, explain how to find good treatment and medications, and advise parents about ways to advocate effectively for their children in school.

The Juvenile Bipolar Research Foundation (JBRF) is the first and only charitable organization dedicated to the support of research for the study of early-onset bipolar disorder. Demitri F. Papolos, M.D. is the director of research of the JBRF, and Janice Papolos is a co-founder.

The Depression and Bipolar Support Alliance (DBSA) is the nation’s leading patient-directed organization focusing on depression and bipolar disorder. They provide tools, peer support and a wealth of inspiring stories to help people pursue their own path to wellness.

The Child & Adolescent Bipolar Foundation educates families, professionals, and the public about pediatric bipolar disorder and connects families with resources and support.

Parents with Kids with Bipolar and ADHD

Parent with Kids with Bipolar and ADHD is a Facebook support group for parents with children who have bipolar disorder or attention deficit hyperactivity disorder (ADHD). Before you leave, take a second to subscribe to my email list. You won’t want to miss out on more bipolar coping strategies, weekly devotionals, and my latest blog posts jam-packed with helpful information that you can apply to your own life As an added bonus, you will receive a free download of my top five favorite bipolar disorder online resources. You won’t want to miss it.