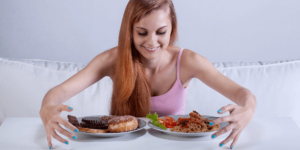 When I considered pulling back the curtain and exposing my unhealthy relationship with food, I thought I would write a simple blog post about food addiction that would be a great follow-up to the post I wrote about the ways the mentally ill self-medicate.

I thought I would Google binge eating, and it would be all about pulling yourself up by your bootstraps to stop overindulging.

Imagine my shock when I did a Google search and the first thing that came up was an article on binge eating disorder.

Whoa. There is an actual mental disorder connected to those who binge eat.

I have a confession to make. When I think of the term binge eating disorder, my first thought is of Mama June Shannon, famous for three reality shows revolving around her train wreck of a life. My second thought is of the subjects of My 600-lb Life.

I’ll be honest. There is a part of me that has contempt for them for allowing themselves to gain so much weight.

I know. It is awful to think that way. And then God gives me a reality check and reminds me I am just a series of bad choices away from becoming the person who disgusts me.

And even though I am not even close to 600 pounds, I could be if I don’t change my relationship with food. My contempt for the people I see on television is a reflection of my self-loathing about my own weight struggles.

I can’t remember a time when I didn’t have an distorted relationship with food. In my family, food is at the center of every celebration and sad occasion.

I yo-yo dieted for years. I was overweight, but one summer put me over the top into full-fledged obesity.

I spent most of the summer of 2002 at my best friend’s house in Baton Rouge. We lived on Krispy Kreme donuts, wine, Dr. Pepper and fattening meals prepared by her friends.

I gained 13 pounds that summer. Ouch.

I had no choice but to get serious about weight loss then. I changed my diet and hit the gym. I lost 80 pounds over a period of a two years. My diet was healthy but restrictive.

The real problem came after I lost the weight. A switch flipped in my head. Now that I had reached my goal weight, I could reintroduce the “bad” foods I had eliminated from my diet.

That created a feast or famine mentality about eating. During the week, I would stick to my restrictive diet, but on the weekend, all bets were off, and I would eat whatever I wanted.

I would lie in bed on Friday nights obsessively thinking about all the delicious food I would eat for the next two days. Every week I would bake something decadent for my weekend binge.

When Monday came, I was back at the gym and back to eating chicken and green beans. That first year I gained back twenty pounds, but I kept the rest of the weight off for almost a decade.

My relationship with food was problematic, but it worked for me until it didn’t.

Once my daughter was born, and I joined Mothers of Preschoolers (MOPS), my circle of friends widened, and there was no shortage of opportunities to indulge in food. Lots of food.

Suddenly, my disordered way of eating was no longer working for me because I broke all my rules on special occasions—which was pretty much every week. 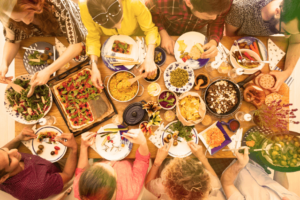 This year after Christmas, the number on the scale hit the highest number I have ever seen. I had to do something. It was no longer a choice.

Writing this blog post couldn’t have come at a better time for me, so I dove into the resources I found online about binge eating disorder.

According to the National Eating Disorder Association (NEDA), “Binge eating disorder (BED) is a severe, life-threatening, and treatable eating disorder characterized by recurrent episodes of eating large quantities of food (often very quickly and to the point of discomfort); a feeling of a loss of control during the binge; experiencing shame, distress or guilt afterwards; and not regularly using unhealthy compensatory measures (e.g., purging) to counter the binge eating.”

The DSM-5 (The Diagnostic Manual of Mental Disorders) formally recognized binge eating disorder in 2013. This is important because some insurance companies will not cover eating disorder treatment without a formal DSM diagnosis.

According to the National Eating Disorder Association (NEDA), there is a multifaceted approach to diagnosing binge eating disorder. Click here to read the complete diagnostic criteria.

If you are unsure if you fit the diagnostic criteria, and the lengthy symptoms list makes your eyes glaze over, remember the simple acronym B.O.L.D. found on BurdenOfBED.com.

B—Binge eating that is recurrent

L—Loss of control when eating

D—Distress as a result of binge eating

I think it is important to note that everyone who overeats—including those who binge occasionally—does not have binge eating disorder (BED).

There are two specific symptoms that separate the occasional binger from someone who has full-fledged binge eating disorder or bulimia:

1. The binge eating occurs, on average, at least once a week for three months.

2. The person does not regularly compensate for extra calories from binging eating by inappropriate methods such as vomiting, using laxatives or excessive exercising.

According to The Mayo Clinic, there are several risk factors that give a person a propensity to develop binge eating disorder:

Treatments for binge eating disorder include:

3. Dialectical Behavior Therapy helps you better tolerate stress and difficult emotions so your desire to binge eat is reduced.

4. Medication used to treat binge eating disorder includes Vyvanse (an ADHD drug), Topamax (an anti-convulsant) and antidepressants. These medications have varying degrees of success, and there are instances of significant side effects.

5. Nutritional Counseling can help the person with binge eating disorder to formulate a meal plan that is more balanced and less likely to prompt binge eating episodes.

Here’s the ugly truth about binge eating disorder: Everyone’s binge eating rituals won’t mimic the exaggerated depictions we see on television when we watch Mama June Shannon or the subjects of My 600-lb Life.

My binge eating rituals may not look like yours. Each person’s experience with binge eating disorder will have similarities, but ultimately will be unique to the person’s own hardwiring.

I don’t go to fast-food restaurants and buy five burgers and three orders of French fries. I am not the stereotypical binge eater, hiding in my car or in my room as I consume copious amounts of food.

But every time food is the center of an occasion or I am letting myself be “bad” that day, I am eating significantly more than everyone else to the point that I am just eating to eat, and I am eating so fast that my body doesn’t get the message that I am full, so I keep eating some more.

Then I get on the scale, and I am horrified by the rising number, so I make all these promises to myself that I break the next weekend or the next cause for celebration.

Does that sound familiar?

You, A Binge Eater?!

I shared my story today to take binge eating disorder out of the shadows, so those who struggle with this disorder can find help as they work toward a healthier lifestyle.

If the symptoms of binge eating disorder ring true for you, consider calling the NEDA Helpline at (800) 931-2237 or visit their website at NationalEatingDisorders.org for encouragement, support and treatment options.

Knowing my obsessive relationship with food is not something I made up, but is an actual mental disorder, gives me hope that I can embrace treatment and develop a healthier relationship with food that isn’t about indulging and withholding but is about eating a variety of foods in moderation without the label of “bad” food or “good” food. 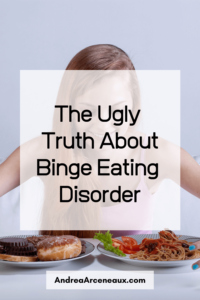