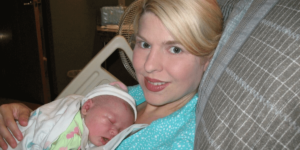 Postpartum depression has taken center stage in recent years because of celebrities stepping up to share their stories. These stories are important. They help destigmatize postpartum depression, and women who would otherwise not seek treatment do so because someone they admire shares the same symptoms.

But it’s not enough to talk about postpartum depression. We have to take it a step further. I shared the story of my experience with postpartum psychosis in my Facebook community, The Light Brigade. Cue the crickets chirping. Although the lack of response hurt, it also galvanized me. 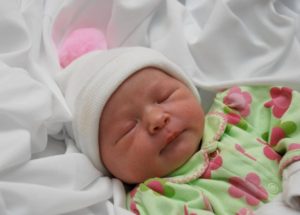 Postpartum psychosis is too important not to talk about, so I expanded my story into a full blog post. I would not be talking about it at all if not for one brave mom in my MOPS (Mother of Preschoolers) group. She spoke candidly about her experience with postpartum psychosis and her family’s history with the illness.

This mom’s courage and vulnerability helped me realize I didn’t have to hide what happened to me. It reminded me that sharing my story is an opportunity to pay it forward and help the next mom ashamed of something out of her control.

The dumbest thing anyone has ever told me about mental illness is that pregnancy would cure bipolar disorder. He said it with a straight face, oblivious to how preposterous he sounded. If that myth were true, the birthrate for females with bipolar disorder would skyrocket.

Here is the kernel of truth in what he said: Pregnancy doesn’t cure bipolar disorder, but for some, those forty weeks are the most stable ones of their lives.

Even though I knew I wasn’t cured, there was a part of me that believed maybe—just maybe—my case of bipolar wasn’t as severe as I thought. I still took precautions. I skipped breast-feeding and picked up my psychiatric medications at the pharmacy on the way home from the hospital.

But there was a false sense of security. I took the same medications, but I didn’t go back up to my prepregnancy dosages, and my psychiatrist didn’t even suggest it. I am sure he thought I was stable. And I was stable for a while. Until I wasn’t.

Sharing my story in The Light Brigade and writing this blog post has helped me nail down a more accurate timeline of my postpartum psychosis symptoms. I didn’t know there was cause for concern until August, but I was exhibiting serious symptoms much sooner. 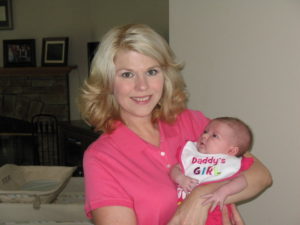 Take another look at the picture of Ava and me with her “Daddy’s Girl” bib on. Cute picture, right? Take a closer look. Something is missing. I don’t have any lipstick on.

That may seem inconsequential, but the people who know me best would tell you I don’t go to the mailbox without putting on lipstick. When my water broke, I took a shower and put on full makeup to go give birth!

What makes this picture significant is the date it was taken. It was Father’s Day—exactly two weeks after I gave birth. That morning the voice in my head told me not to wear lipstick, so I didn’t. I was already in trouble.

By mid-August, I had full-blown postpartum psychosis. I could check off practically every symptom on the list.

There were no voices telling me to harm my baby, but I had thoughts that said, “What would happen if you hurt your baby?”

I was sicker than I would like to admit. I lost touch with reality completely, if only for a few days. My psychiatrist brought me back down to earth quickly, but regaining complete stability was a struggle for months.

My psychiatrist said he could always tell how well I was doing based on the number of calls I made to his office. If I was doing well, I didn’t call at all. From August to November 2010, I called him incessantly for reassurance I was okay and would not hurt my myself or my baby.

I never let on how suicidal I was until years later. That Christmas—alienated from my family and bombarded by intrusive thoughts—I sat at my in-laws’ house and silently begged God to kill me. The intrusive thoughts were so bad that I believed my daughter would be better off without me.

I can’t tell you when I was finally better. I didn’t mark the day on my calendar. But gradually, things became bearable. Then they got better, and then postpartum psychosis was nothing more than a dim, but terrifying, memory.

“Postpartum psychosis—also known as puerperal psychosis or postnatal psychosis—is a severe but treatable form of mental illness that occurs after having a baby. The symptoms vary and can change quickly. The most severe symptoms last from two to twelve weeks, and recovery takes from six months up to a year.”

There are three things you should know about postpartum psychosis:

1. A woman with no prior history of mental illness can develop postpartum psychosis.

Knowing any woman can develop postpartum psychosis is a frightening—but crucial—fact to know. New mothers should be on the lookout for possible symptoms in the weeks that follow giving birth. People often miss the warning signs because they mimic the rollercoaster ride of new motherhood—sleep deprivation, irritability, depression, etc.

2. Postpartum psychosis is temporary and treatable, but it is a psychiatric emergency. Seek treatment immediately.

For the safety of the mother and the child, treatment should be sought at the first sign of a problem. It is not always clear cut. Emotions are unstable as the hormones that produce well-being during pregnancy plummet. Personality changes may be discounted or thought to be just a mother’s process of adjusting to the new normal of motherhood.

Husbands, pay attention to your wives. What you believe is normal sleep deprivation may actually be insomnia or the beginning of mania. Unfortunately, in my experience, hindsight is 20/20 when it comes to detecting the symptoms of mental illness.

3. Although postpartum psychosis is a psychiatric emergency, the percentage of mothers who harm themselves or their babies is quite low.

I will be honest with you. When I think of the term postpartum psychosis, another Andrea—Andrea Yates—comes to mind. The drowning death of her five small children was horrific enough to cause anyone diagnosed with postpartum psychosis to hide their illness for fear of how the public will receive them.

Research has shown there is a 5% suicide rate and a 4% infanticide rate associated with the illness. It is important to note that many women who develop postpartum psychosis never have violent delusions. And while we would all rest easier if those percentages were zero, violent and deadly outcomes from postpartum psychosis are the exception not the rule.

I hope this blog post begins an ongoing dialogue about postpartum psychosis. I believe there are women just like me hiding in the shadows afraid to share their story because of how their friends, family and the world will react.

Just as I spoke about in my blog post on psychosis, people struggling with psychosis—whether postpartum or not—need compassion and help, not fear.

While researching postpartum psychosis for this blog post, I discovered three amazing online resources. All facts and statistics were compiled from these sources: 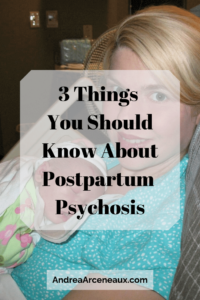